The aims of the cardiologic association for subaquatic medicine (ACMS) are theoretical and technical training and research in underwater and hyperbaric medicine in general and in the field of physiology and pathology of cardiovascular disease in particular.

The ACMS works in association with the "cardiologic study group" of the Medical and Prevention Commission of the french underwater federation to establish the list of diving-contraindications.

WARNING : This website is intended for communication between members of the ACMS, the information of cardiologists face diving problems, diving physicians or confirmed divers faced with heart disease . This site does not have an educational purpose for the general public.
NO MEDICAL ADVICE CAN BE GIVEN DIRECTLY FROM THIS SITE.

In its latest recommendations, the French Underwater Federation (FFESSM) listed congenital heartdisease as a formal and final contraindication to scuba diving. On the other hand, with the progress made in their management, the prognosis and quality of life of patients with congenital heart diseases have improved considerably, enabling them to engage in physical andsports endeavours, which are known to confer general health and psychological benefits. As a consequence, the ability of these patients to dive has become a regular and recurrent issue. Wereview the various types of scuba diving, the physical performance required for its practice,its effects on cardiovascular function and the elements that need to be considered before recommending whether it can be practiced safely at various levels of difficulty. Because ofthe diversity and broad heterogeneity of congenital heart diseases, a detailed evaluation ofeach patient’s performance based on clinical criteria common to all congenital heart diseasesis recommended. (July 26th 2016)

Underwater activities take place in a hostile environment where any failure can be fatal. Particular attention must be paid to the primary risk of cardiac block or arrhythmia in accordance with european and american guidelines . Recommendations for the participation of competitive sports can lead to 3 situations when applied to diving :
- Capacity to perform all underwater sports or leisure activities. This may concern non-sustained arrhythmia, radically ablated tachycardia, single bundle-branch block, functional and asymptomatic bradycardia or prolonged PR interval (even in the absence of heart disease or other pathology).
- Contraindications for underwater activities in case of non-implanted lesional heart block, any sustained ventricular arrhythmia (even in the presence of implanted cardiovecter defibrillator for primary or secondary prevention), in case of non-radically ablated paroxysmal junctional tachycardia and in any situation where a risk of syncope persists.
- A need to assess specific conditions and limits for the practice of underwater activities on individual basis. As a result, patients equipped with pacemaker must be limited in depth depending on the can presure strength. Despite its prevalence, atrial fibrillation remains a particular problem because of its unpredictible behavior.
The physician should not be too rigid but caution must be exercised when considering indications or contraindication for underwater activities. If necessary, a sufficient delay of at least 6 months, to assess rhythmic stability, should be taken.

Scuba diving is usually contraindicated in subjects with coronary heart disease because of the undue strain it asserts on the cardiovascular system. However, a more flexible approach may be considered when assessing highly motivated individuals. In patients presenting with diffuse arteriosclerosis, coronary spasm or impaired cardiac function (defined as < 50% LVEF) contraindication is definite. In other cases, scuba diving may be considered if a minimal 6-month delay following a coronary event is respected. The subject should remain asymptomatic during this period. Risk factors should be optimally controlled in accordance with current preventive therapeutic guidelines. Cardiac stress testing should not evidence signs of ischemia or arrhythmia and should show that the subject undertakes regular sustained physical exercise. If these conditions are met careful consideration can be given for scuba diving. Only recreational diving should be approved and eventual instructional diving should be limited to 6 meters. Monitoring of other divers and use of hypoxic mixed gas are prohibited.
Table - Full text in french – Poster for the XIXth SFC's European days (jan 16th 2009). 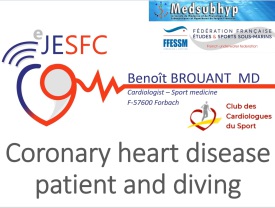 Like any physical activity, underwater activities increase blood pressure with significant variations related to mental stress, cold and, specifically, hyperoxia. Patients with hypertension are more prone to these changes because hypertension is a disease of vasomotion with potential visceral sequelae. They may thus be more subject to sudden death or immersion pulmonary edema.
When evaluating a hypertensive diver, the physician should be particularly careful if other risk factors, pathologic state or end organ damage (cardiac, renal, cerebral, retinal) is present.
Management of hypertension must be consistent with current guidelines. For treatment, ACE inhibitors or ARBs are preferred for their good tolerance, with particular caution for the risk of dehydration with diuretics. Beta-blockers should only be used when necessary and are subject to specific conditions.
There will be no restrictions for asymptomatic patients whose BP is controlled (< 140/90 mmHg). We may require special conditions of practice for high risk or uncontrolled subjects (no cold water diving, limited to 30 m and no enriched oxygen mixture) or extend the temporary contraindication if BP is not controlled (> 160/100 mmHg). All hypertensive divers should receive specific information.
Table - Full text in french – Poster for the XXIVth SFC's European days (jan 17th 2014).

There is no argument for the systematic search of patent foramen ovale (PFO) among divers. The DAN is conducting a prospective study because a real risk remains under assessed. Pending the results, caution is still required when a PFO is discovered.
Following a vestibular or cerebral form of decompression sickness, presence of a right to left shunt must be eliminated. If evidenced, scuba diving practice will be rediscussed and at time be adapted (for reducing level of desaturation bubbles) without exclusion. The  french high health autority has not accepted an indication of closure of PFO after a diving injury.
Full text in french. (update november 29th 2010)

The Rendu-Osler-Weber syndrome is manifested clinically by recurrent epistaxis and the appearance of mucocutaneous telangiectasia in a family context. It is a genetic disease, autosomal dominant, affecting angiogenesis with gradual formation of aneurysms and especially arteriovenous fistulas. The french high health autority prohibits scuba diving in the event of pulmonary shunt. Its evolving nature exhibits unexpectedly at risk of paradoxical embolism and diving should be discouraged even in minor forms initially.
HAS full text in french. (update march 31th 2010) 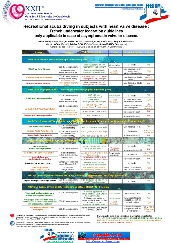 Certain moderate valve abnormalities may allow sports activities and particularly scuba diving. A comprehensive evaluation of the valve diseases and its consequences on left ventricular function and pulmonary artery pressure at rest and, if possible, at exercise is necessary to decide on the ability of practicing recreational scuba diving, which can be allowed exclusively in asymptomatic patients. Exercise evaluation is essential in valvular stenosis and should be recommended in valvular regurgitation. Diving may be allowed in moderate valve disease with normal left ventricular function and pulmonary artery pressure, excluding patients with arrythmias. Moderate mitral valve disease with atrial fibrillation should meet specific conditions and limits to allow underwater activities, on an individual basis. Diving may be resumed after valve surgery. However, valve prosthesis require particular caution, especially for oral anticoagulation management.
These recommendations have been established according to ACC/AHA and ESC/EACPR Guidelines for physical activities and sports.
Table - Table in french- Full text in french - Poster for the XXIIth SFC's European days (jan 14th 2012). (update january 18th 2012)

Recreational diving, performed reasonably, is not traumatizing. There is a risk of shock especially during manipulation of diving equipment. The barotrauma can be avoided by well codified maneuvers.
Antivitamin K does not contraindicated diving if the INR is stable (between 2 and 3). This is not compatible with the prevention of mechanical valve prosthesis thrombosis. As against this INR is compatible with treatment of atrial fibrillation. In such cases, the practise of diving is dependant upon heart function and the adaptation of the ventricular rate during these activities.
Full text in french.

The use of beta blockers is usually not advised in underwater divers but temporary, even short-term suspension, may lead to harmful consequences. This therapeutic class is, in fact, often well tolerated without adverse or even dangerous peripheral, respiratory or physical side-effects.
Scuba diving under beta-blocking agents is possible if the following conditions are respected :
-when prescribed for a health problem compatible with underwater diving.
-by choosing a molecule and dosage best suited for the subject.
-if respiratory tolerance is optimal, verified, if needed ,by a pneumologist.
-conserved physical capacity demonstrated by effort testing under treatment. The subject should be capable of reaching METs or watts corresponding to maximal theoretical VO2 or PWC values. If these conditions are met, a certificate of non contraindications can be delivered or renewed as long as a yearly EKG is realised in individuals over 40 years-old.
Table - Full text in french.

Data on the tolerance of cardiac pacemakers during diving are very scarce. A study, with the support of cardiologists of sport's club, was conducted testing isolated pacemakers in a miniaturized hyperbaric chamber. Continuous telemetric monitoring shows normal electronic function up to 7 ATA (MSW 60 - 200 feet deep). However, most of the devices tested had distorted their pacemaker's can.
Following this study, the ACMS will contact divers with pacemaker for a prospective study.
Contact-us : pm@cardiosub.com 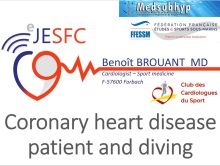 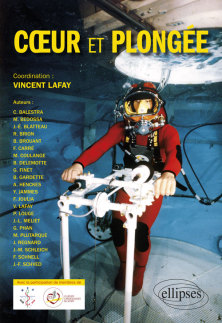